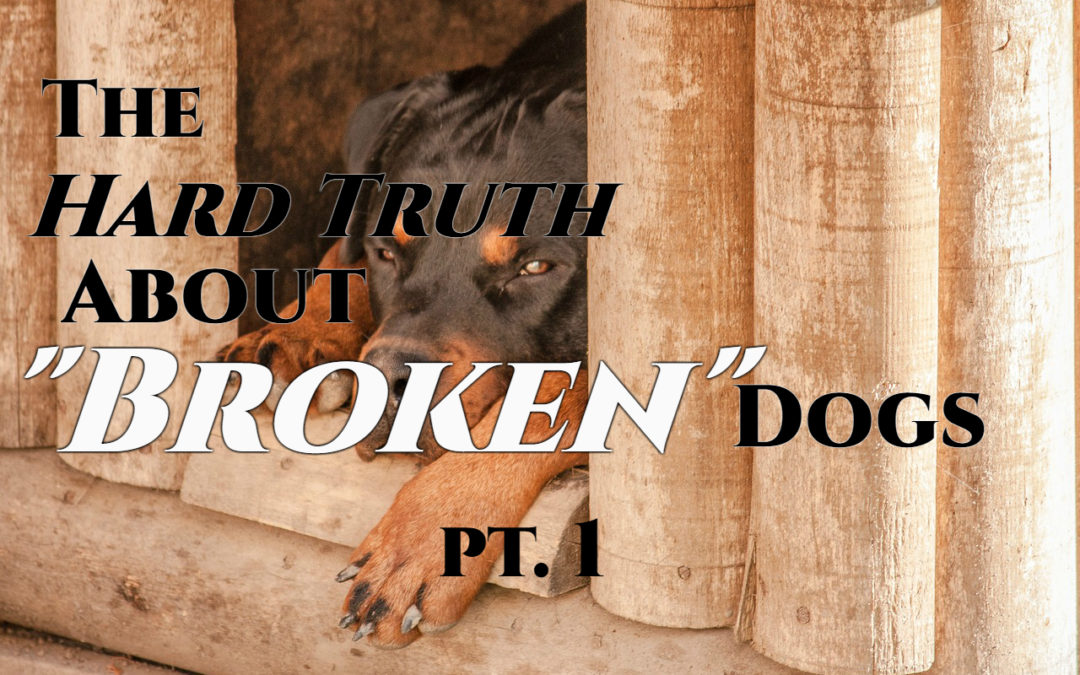 Thank you for returning and I hope this becomes a routine. I wracked my brain all week about this next blog and one topic- or I guess story- in particular kept coming back to me. I first need to give everyone a heads up. A lot of these blogs are going to be, what I hope is informative. Some will be happy and wonderful, and some will be heart breaking. That being said each one is meant to bring a point across as well as to hopefully change a life (dog or human’s).

This one may fall under the heart breaking option. If that is not something you want to read, I completely understand. There is enough going on in the world, not everyone wants another thing to add. This year, I will be touching on three dogs in particular who wormed their way into my heart and will forever be remembered. These dogs are the most important ones in my journey at the shelter and were deciding factors to become a trainer.

All three names hold dear memories and the first two also hold a great deal of sadness and loss. As the cold winter months come and go I am reminded of the first dog on the list. My Ter Bear 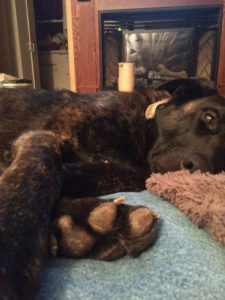 Terry came into the shelter after what I was told was months of running around an abandoned building. He was too fast to catch and too fearful of people to approach. There were a few from the public who began leaving food out for him until finally a live trap caught him. At that time, I was the “dog person” on staff and it was my job to work with the strays who came in. This boy was skin and bones, tired and most of all broken. His spirit and will seemed to be non-existent.

I spent days sitting outside Terry’s kennel. I spent every lunch reading out loud and offering half my food. I begged and pleaded in whispers for him to trust me. I spent my nights thinking of ways to connect and my days going hungry because my sandwich was laying on the cold concrete of his kennel. I had seen hundreds of dogs. Some more fearful than others. But this boy’s warm hazel eyes spoke to me. I couldn’t give up on him.

Little did I know this was just the start.

After what seemed like eternity, Terry started to brighten when he saw me. He was finally willing to uncurl just in the slightest from the far back corner to come see me. However, I soon noticed that Terry was not bearing weight on his back leg.  I took what little trust I was given and had him examined and it was determined Terry not only appeared to have been starving and sad, but he had also been injured on his journey. He soon was prepped and ready for surgery while I anxiously awaited the results. My mind would race but I always found myself stuck with one thought:

Where were his owners? Who lost this dog and why had they not done their duty and looked after him?

Once Terry was in recovery, I knew that I could not leave him in a kennel that night. I had opted to take him into foster and work with both his physical and mental needs. 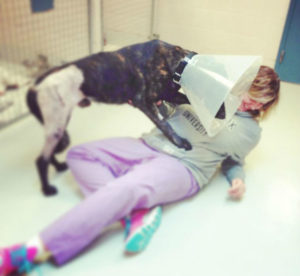 The first three nights were perfect. We dedicated the entire living room to him and he was the best patient. He settled well while I made a makeshift bed on the floor and tried to give him as much comfort as possible.  He hated his cone more than anything and he was the most pathetic sight, but some things became abundantly clear. First, Terry was house broken. He had lived in a house before and he knew the comforts of a couch. Second. He knew some basic commands. Shake a paw would often lead to a massive paw to the face as his excitement for praise over threw his self-control or aim.  Third, he was at one point someone’s dog. Lastly, this dog was terrified, horrified, absolutely petrified of men.

My father is the kindest man I have ever known. I often wonder if he is where I get my love and skills with animals from. I have never seen a dog not love him. He was a bleeding heart and, in the past, had not only let me have a horse but let me bring home a dog, and foster any creature that needed love, Terry included.

None of this seemed important to Terry. If he heard my father speaking downstairs his entire body would tremble. If he heard his footsteps he would begin looking for any escape and at one point he had even tried to push through our bay window in the living room. My wonderful Father’s heart broke but he kept as much distance as possible. He avoided eye contact and he stayed away.

As Terry healed, he began to sleep in bed with me every night. Always being the little spoon which would end up with me at the edge of the bed and him taking up more than his share. Our walks began to progress with more and more weight being bared on that leg and his love for all human food began to increase as my mother sneaked more and more table food to him, claiming she couldn’t help it. 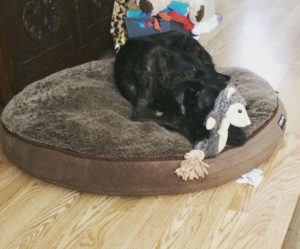 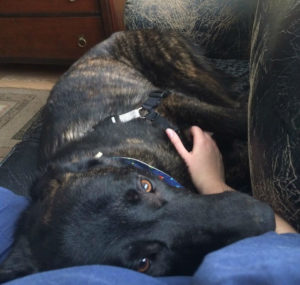 This dog wasn’t feral as first believed. He was a pet. A house dog and somebody had done an injustice to him.  They had mistreated him and/or under socialized him. They had this wonderful marvelous dog and turned him into a 80 lb quivering mess when a man came within 50 feet.

During the few months of recovery, Terry had to spend some evenings in the shelter. I had two other jobs and I knew he wouldn’t be okay in the house alone with my father. On one night in particular there was an incident, he had slipped his collar and I got some heart-breaking news.

For the next three weeks I spent every free moment searching for him. I went knee deep in the thawing Grand River looking for any sign that he was out there or at least to know that my search should come to an end. Thankfully almost every day there was sightings believed to be my Ter Bear. I waited by my phone every minute to get updates as my hope began to diminish. After all, he had spent so long on the run, how on earth would we catch him again? Those weeks were some of the hardest I had been through. I lost hours of sleep and I couldn’t concentrate on anything else.

It had been days with no new sightings and I had begun to fear the very real reality that I would not see Terry again. During an early morning shift I was in the kitchen getting ready to feed the shelters adoption dogs when my co worker came up to me. I to this day will never forget what she said. She asked me,

“What is Terry eating?”

I looked at her confused not understanding what she was asking. When I explained what food was being put in the live traps, she stopped me.

“No honey, you don’t understand. Terry is in his kennel. What should I feed him?”

I raced to the back and sure enough, there was Terry, thinner than he should be, and he looked sore, but he was alive. I raced to open his kennel, threw my arms around him and cried. Apparently my boy had sauntered up to my coworkers outside, stolen their breakfast and then wandered into his kennel once the door was held.

He came home with me that night and he found his spot in my bed just like old times and we were thrilled. 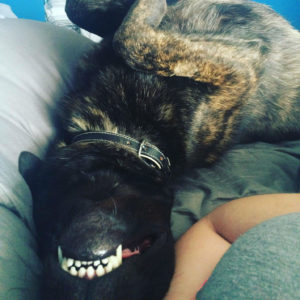 However, it soon became obvious that the time spent away had done more damage to his growing trust and we were back at square one. When walking, he would cower to the ground and urinate if he heard a man. He would panic on the voices on the television and we had more than one incident with the bay window. I felt hopeless. I knew I couldn’t keep him nor could I continue to house him at home knowing how terrified he spent his time while my father was there. I began to reach out to rescues and fosters but we all came to the same conclusion. Terry may be too far gone.

It became more and more clear to me that this wasn’t fair to him. He didn’t deserve to live in fear all the time and it was not realistic to think he could live with me for the next 7 years in the state he was in. He loved me so incredibly much and I him. But I knew this fear wasn’t a phase, it wasn’t going away and it was getting worse.

It was decided that Terry would be humanely euthanized as it was the kindest thing to do for him and to this day my heart breaks for him. But mostly, I am horrified that a dog could be in this state. I don’t know his history; however, I do know that he was mistreated, and he deserved better. He did not deserve to be abandoned and forgotten about. He should have been the house pet he once was.

What if’s come to play here. What if he had been properly socialized? What if his owner had a trainer and worked on whatever issues he had? What if they reached out? I don’t know why he ended up where he did but I can’t help but feel it could have been prevented. I knew then that I would work my hardest for every other dog who could end up where he did. I would make sure I learned from this and gave options to those who need help and those who have little knowledge on fear in dogs. I would make sure every puppy I come into contact with would only know love from every human in hopes that they will be well adjusted.

I will forever miss my Ter bear but I know that I gave him love when he only knew fear and I will continue to do so to every other four legged creature in my life.

If you take anything from this post, let it be this. Socialize your dog properly, if you have troubles- contact a trainer who is certified in positive reinforcement and work with them. If you need to re-home your dog, use reputable rescues and know where they are going. Lastly, if you lose your dog, please do not give up on them. Search, call local shelters and rescue groups and have them chipped.  Don’t leave them out there on their own please.