Welcome family, friends, clients, dog lovers, dog enthusiasts, dog parents, and anyone who may have randomly stumbled across this page I forced my business partner to give me for my rambles. I am going to attempt to keep myself on track and really stick to what I am trying to write about. That being said, you should know my teen years were spent planning to write for a career and this is now my platform.

First, I should introduce myself. My name is Kyla and I am now a dog trainer. Wow, that sounds weird to say. You see, I had always loved animals and dogs have always had a special place in my heart, but I never really thought I would end up out here in the real world taking on the dog community, because for the last six years, I have spent every waking moment saving dogs. That was my drive and purpose. To work in a shelter and save as many dogs as I can. Working tirelessly and breaking my own heart when the reality did not meet my expectations. I never thought my passion would bring me here. So, let me tell you why or where my path took a turn.

Six years ago, I started at our local shelter as an animal care assistant. Which is just a really nice way of saying poop cleaner. It is odd to think about how happy a young woman can be scrubbing feces off a wall. Maybe it was because when all the cleaning, sweating and poop was done I was left looking into the face of a helpless homeless animal who had then decided the sun rose and set with me and my love. This is where the shelters get you. They pay you very little, they work you hard with little appreciation, but they trap you in a cold hard building with these helpless little animals who are looking to you for love and you know you could never turn your back.

My bright eyed and bushy tailed self had yet to see the realities of what this work can do to you. I had yet to see the horrors that the slow-mo commercials which have the “in the arms of the angles” sound track, show you. I did not understand what humans were capable of when it came to our furry companions.

Now, I could go into detail of all the things I saw or dealt with. Instead today, I want to focus on one thing in particular.

According to Humane Canada, there were over 100,000 dogs brought into Canadian shelters in 2012, my first year at a shelter. Now I don’t know every reason or detail, but I can tell you what I do know. I know that almost every dog I met in the shelter COULD have been saved in the right circumstances. This means there is no concern for space, money, amount of staff and time. I also know almost every single dog brought into a shelter as a surrender is because of training or socialization issues or in most cases, both. This is something I didn’t understand going into it. My family had never given up an animal. We had always just dealt with the issues we were handed. Now, I know, please hear this, I KNOW that there are circumstances that keep families from keeping their animals. I KNOW that there are times where the best thing for both animal and human is to give an animal up. I KNOW that most people are heartbroken to drop off their animal at the front desk and walk away ignoring their dogs barks and whines for them to come back. I have held, hugged and comforted my share of owners who were devastated to say goodbye. That being said, I was just as distraught to hear their beloved pet’s last breath.

This is where training comes into play. I was incredibly lucky to have some incredible leaders to take me under their wing. I was lucky to be able to witness what a single person can do with a dog who has been deemed “untouchable”. I saw what love, patience and positive reinforcement could do. I observed the worst of the most dangerous dogs in our city come around in days when working with our amazing trainers who never did more than read the dogs body language correctly, offered soft words or praise and understood how a dog’s brain works.

I never once saw a single second of what I had witnessed on t.v. with a certain trainer who likes to claim he can whisper to canines. I never saw a hand raise, a leash jerk or a stare down. At a certain point I finally decided to ask why and I was told something I would never forget.

Punishment does not teach.

Punishment does not teach. Isn’t that something. Punishment does not teach. You know what does. Praise. Rewards. Love. Dogs communicate so effectively with each other and us that it puts humans to shame. We look like cavemen compared to what dogs are capable of communicating in a matter of seconds. Often when people run into trouble with their dogs, it is because they do not understand what their dog is saying or asking. They do not understand the dynamics between dogs and humans and we are so caught up in being an alpha leader ( there will be more on this later) that we are too embarrassed to admit that we have no idea what we are doing.

And our embarrassment leads to shelters being filled with that Christmas present no one was really ready for. Filled with those puppies we picked up off a farm that really didn’t do anything but be a dog and do what dogs do. We bit off more than we can chew and reached out to the wrong people. We asked for help from that friend who has raised dogs for the last 30 years. We took their advice and bit the puppy on the ear and yet the now 6 month old 40 pound dog is growling at us when we approached their bowl. Our heavy hands and loud words and reprimands did nothing and we are at our wits end. But why?

Because…. Punishment does not teach

The shelter staff was onto something. That much I knew. They weren’t magic, they weren’t lucky. They were passionate and kind and most importantly, they were educated. They understood how a dog sees the world and they were constantly learning and adapting.

My hope here is that I can do the same. I hope that with this blog and my career that I can help those who want to do better by their dogs and want to learn. I want to help anyone I can, learn to understand what their dog is telling them and more importantly show everyone that

Punishment does not teach. 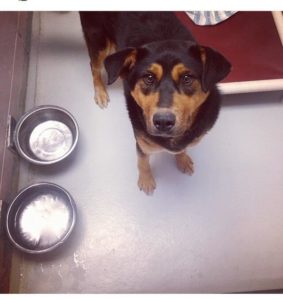 This is Honey, the first of many dogs I would fall in love with over 6 years. She was worked with, rehabilitated and saved!